COVID-Plagued California Nursing Homes Often Had Problems In Past

When Jorge Newbery finally got through to his 95-year-old mother, Jennifer, on a video call April 18, she could barely talk or move and her eyes couldn’t focus.

It was the first time he had seen her since California nursing homes shut their doors to visitors a month earlier. Immediately after the video chat, Newbery called the front desk in a panic.

Newbery’s mother was living at the Rehabilitation Center of Santa Monica, one of 198 nursing homes in California where at least one patient had contracted the coronavirus as of April 28, public health records show. The outbreak at the Rehabilitation Center has been worse than most, with 12 employees and 24 patients infected, including nine fatalities, according to the Los Angeles County health department.

The Rehabilitation Center shares several other worrisome characteristics with many other homes beset by coronavirus infections: Historically, it has had lower-than-average staffing levels and a record of not always following basic staffing and infection control rules, a Kaiser Health News analysis shows.

Compared with homes reporting no patient infections, California facilities with one or more patients with a COVID-19 case had on average a 25% fewer registered nurses per resident in the final three months of 2019, the last period for which the federal government has published data.

In addition, 91% of nursing homes reporting at least one case of the virus had a previous health violation for not following infection control rules, while 81% of homes without reported cases had such violations. Typical violations included nurses or aides not washing their hands or wearing protective clothing around potentially contagious patients.

“With low RN staffing, it is not surprising that these facilities have had previous violations for infection control and poorer overall quality as measured by having more deficiencies,” said Charlene Harrington, a professor emerita of the School of Nursing at the University of California-San Francisco. “It is a classic situation that reaffirms what researchers have found previously, only the situation with the COVID-19 virus is far more serious than anything the nursing homes have experienced before.”

In an email, Jeffrey Huang, the administrator of the Rehabilitation Center of Santa Monica, said “we respectfully and strongly disagree” that Medicare assessments of the home’s quality predict or reflect the nursing home’s efforts to protect residents from the coronavirus. The staff was “continuing to do everything possible for keeping our residents and staff safe in these uncertain times,” Huang wrote. He declined to discuss Newbery, citing patient confidentiality.

Nursing homes have emerged as one of the places the coronavirus spreads most aggressively. In California, 4,711 nursing home residents had been infected and 663 had died by the end of April, about a third of all COVID-19-linked deaths that homes in the state have reported to authorities. 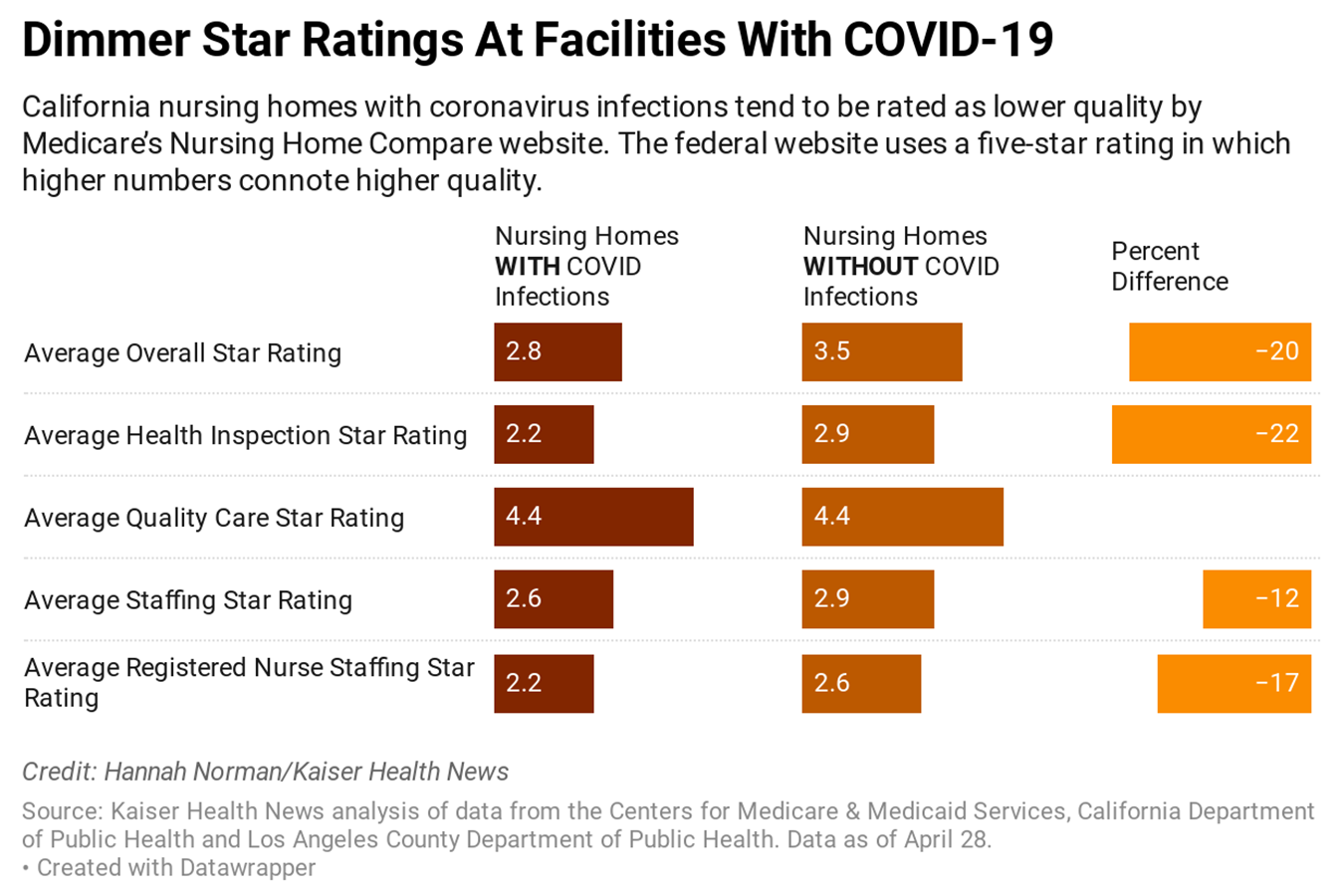 The KHN analysis is the first to compare Medicare’s public quality measures for the 198 California nursing homes that registered coronavirus cases by late April with the 983 homes with no cases reported to either the state public health department or Los Angeles County, where a majority of homes with infections are located. KHN found that California homes with coronavirus cases averaged 2.8 stars on Medicare’s five-star overall quality rating, while other homes averaged 3.5 stars.

On average, the homes that have had coronavirus cases had more complaints lodged against them and were fined 29% times more often. In addition, Medicare also calculated that their health violations of all types were 20% more serious. They also tended to be larger, averaging 105 patients versus 83 on the homes without virus cases.

The analysis found no substantial difference in the homes’ numbers of nurse aides or licensed practical nurses, but fewer registered nurses, who have the most medical training and supervise the other caregivers. On average, there was one registered nurse for every 39 residents at a California home without a patient coronavirus infection versus one RN for every 52 residents for homes with infections, KHN’s analysis found.

Certainly, nursing homes with stellar quality ratings also have had coronavirus outbreaks. Nursing Home Compare, the federal government’s consumer website, gave its top overall rating of five stars to Life Care of Kirkland, the Seattle-area nursing home that was the first reported to have a slew of infections. In California, 12 of the nursing homes with coronavirus infections had above-average ratings for both staffing levels and inspection results, although only three had no history of infection control citations.

The prevalence of coronavirus infections in lower-rated nursing homes could be explained by poorer care, but there might be other factors, said David Grabowski, a professor of health policy at Harvard Medical School. For instance, the lower-rated homes might be primarily located in low-income areas with high rates of coronavirus cases in those neighborhoods, he said.

“This suggests a very different set of policies if we want to protect nursing homes from further outbreaks,” Grabowski said.

Representatives of nursing homes rated as below average on Nursing Home Compare say that the coronavirus has thrown everyone off guard and that registered nurse staffing levels are irrelevant to whether a patient is infected by the new virus.

“It’s really hard to draw a straight line from” issues raised in previous years’ inspections “to this pandemic that even the experts didn’t see coming and were not prepared for,” said Elizabeth Tyler, a spokesperson for Longwood Management Corp., which runs three nursing homes with coronavirus infections that were also poorly rated before the pandemic: Studio City Rehabilitation Center, Burbank Healthcare and Rehabilitation Center and Sunnyview Care Center.

Burbank and Sunnyview have a health inspection rating of one out of five stars, which is much below average, while Studio City has two stars. Tyler said that health inspection ratings are a “very, very complex system” taking into account hundreds of different factors, and she hesitated to make any connections between past reviews or staffing levels and the current outbreak.

Lakeview Terrace in Los Angeles, which has recorded three cases of COVID-19, has been on a list of 15,000 nursing homes around the nation that health inspectors are required to visit more frequently because of repeated violations of patient safety rules. It has an overall Medicare rating of one of five stars — the lowest rating — and almost six times the national average of health deficiencies.

In August 2019, inspectors faulted the home after they saw a nursing assistant deliver a breakfast tray into an isolation room without putting on personal protective equipment. They also discovered the home was not keeping logs to track signs and symptoms of possible infections.

DJ Weaver, an administrator for Lakeview Terrace, said that on the rare occasion that mistakes happen, the facility counsels and trains staff and makes systemic improvements to prevent future occurrences.

“Overall, we have done a good job not allowing cross-contamination of any infectious organisms, which is the real danger,” Weaver said in an emailed statement.

Lakeview’s cases came as a result of accepting a hospital patient who had undiagnosed COVID-19, Weaver said. His infection of two roommates couldn’t have been prevented by the facility’s policies designed to protect residents from the virus. Those include banning staff from working at multiple nursing homes and suspending group dining and activities.

“That kind of thing is really hard to foresee,” Weaver said.

Jennifer Newbery entered the Rehabilitation Center of Santa Monica in April 2019. Up until the day of the video conversation, Jorge Newbery said he and his four siblings had been told by staff that the nursing home had only three cases of COVID-19, and that everything was under control.

But after the home transferred Jennifer Newbery to a local hospital, doctors told her family she tested positive for the coronavirus and had pneumonia, Newbery said.

When Newbery later called to thank the staffer for facilitating the video chat, he asked if the facility had seen any deaths.

The staffer said yes, Newbery recalled, and it floored him. “We absolutely had no idea,” he said.

Newbery said his mom is getting better at UCLA Medical Center Santa Monica. After she’s discharged, Jorge wants to take her to Chicago to live with him and his family.

Newbery said he had been unaware of Medicare’s critical assessment of the Rehabilitation Center, which has two stars out of five overall on Nursing Home Compare, denoting below-average care. Inspection records show that during a visit in May 2019, health inspectors faulted it for failing to sanitize a blood pressure cuff before it was used on a second patient, and for allowing a urinary drainage bag attached to a catheter to be touching the floor. In August 2019, inspectors determined the home violated California’s minimum staffing requirements because it lacked enough nurse assistants on 10 out of 24 days.

Huang, the administrator, noted Medicare gave the facility five stars, the best rating, in a quality category that assesses things like the frequency of patient trips to the hospital or emergency room and homes’ self-reported assessments of how often residents improved during their stays. The regulators who issued the May 2019 deficiency found no evidence of harm to a resident, he said.

Michael Connors, an advocate with the California Advocates for Nursing Home Reform, said nursing homes with fewer staff members and poor compliance with infection control practices are ripe for the spread of the virus.