Beyond The Glam: Feeding The Coachella Valley’s Most Vulnerable Residents

Poverty is real in the Coachella Valley, a region known for its glitzy resorts and music festival. During the COVID crisis, the California National Guard and California Conservation Corps are helping an area food bank distribute food to older residents and those with disabilities.(Heidi de Marco/KHN)

The Coachella Valley is perhaps best known for big-ticket attractions: its annual namesake music festival and tennis tournament in Indian Wells, and the swanky resort town of Palm Springs.

But there’s a flip side to all that glam.

Poverty is also endemic to the desert valley, which stretches for 45 miles in Riverside County. The median household income there is roughly $45,500, less than two-thirds the statewide median.

Among the most vulnerable are the area’s seniors, many of whom lack access to fresh and healthful food during the COVID-19 crisis.

In response to the pandemic, the FIND Food Bank in Indio, California, started delivering food in March to area residents 65 and older and those with disabilities who are confined to their homes. It serves an average of 150 people weekly.

Food banks around the state are relying on the Corps and National Guard as they experience “a simultaneous shortage of volunteers and a significant increase in the demand for food,” according to the California Association of Food Banks.

“Before the pandemic, we were servicing 90,000 people per month,” said Lorena Marroquin, director of community impact at FIND Food Bank. “We are tripling what we’ve been doing in the past.” 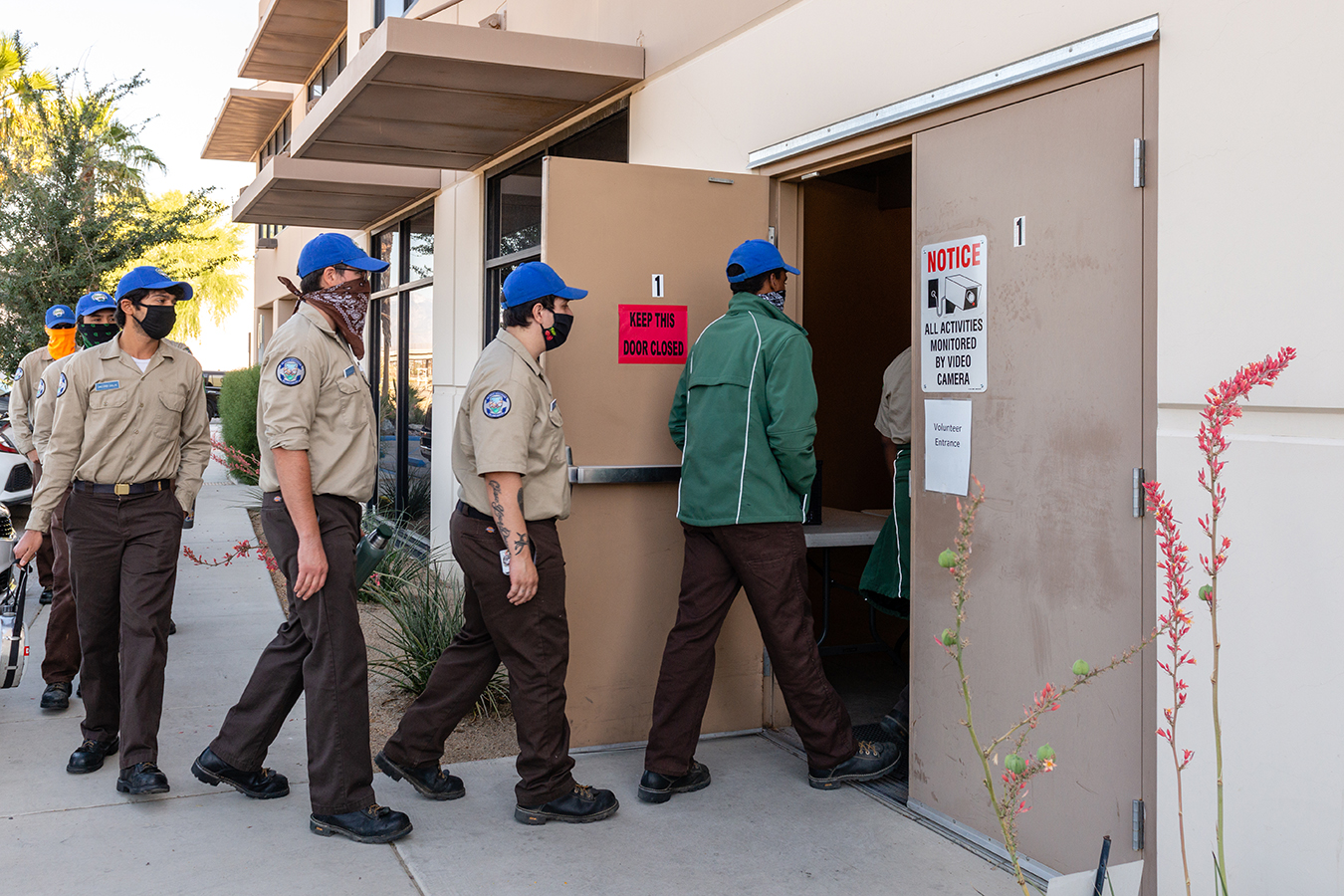 California Conservation Corps members enter the FIND Food Bank warehouse in Indio at 8 a.m. on a Tuesday in late April. Corps members are assisting more than a dozen food banks around the state that are struggling with a surging demand for meals.(Heidi de Marco/KHN) 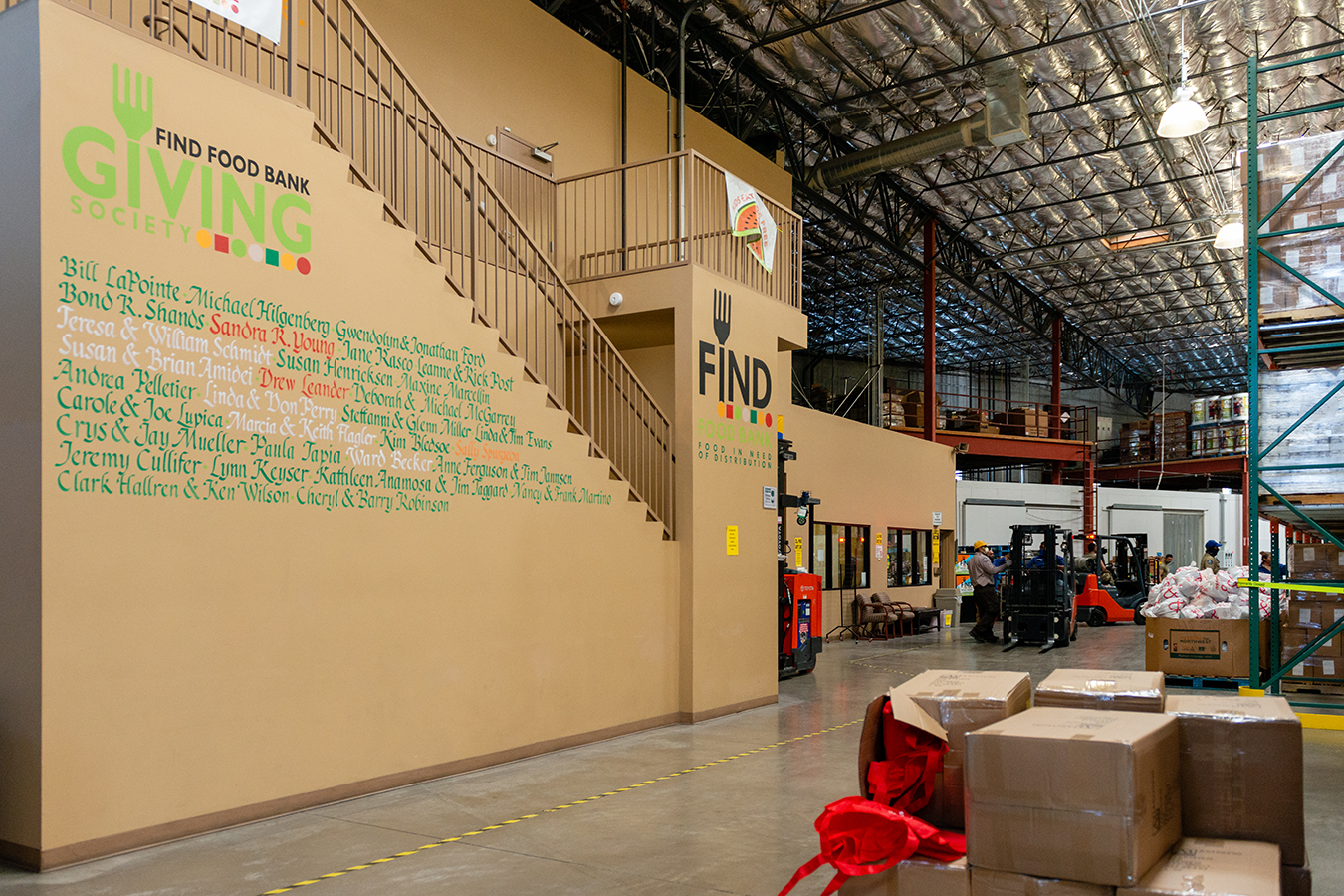 The FIND Food Bank’s volunteer rolls have thinned by about 75% because of the statewide stay-at-home order.(Heidi de Marco/KHN) 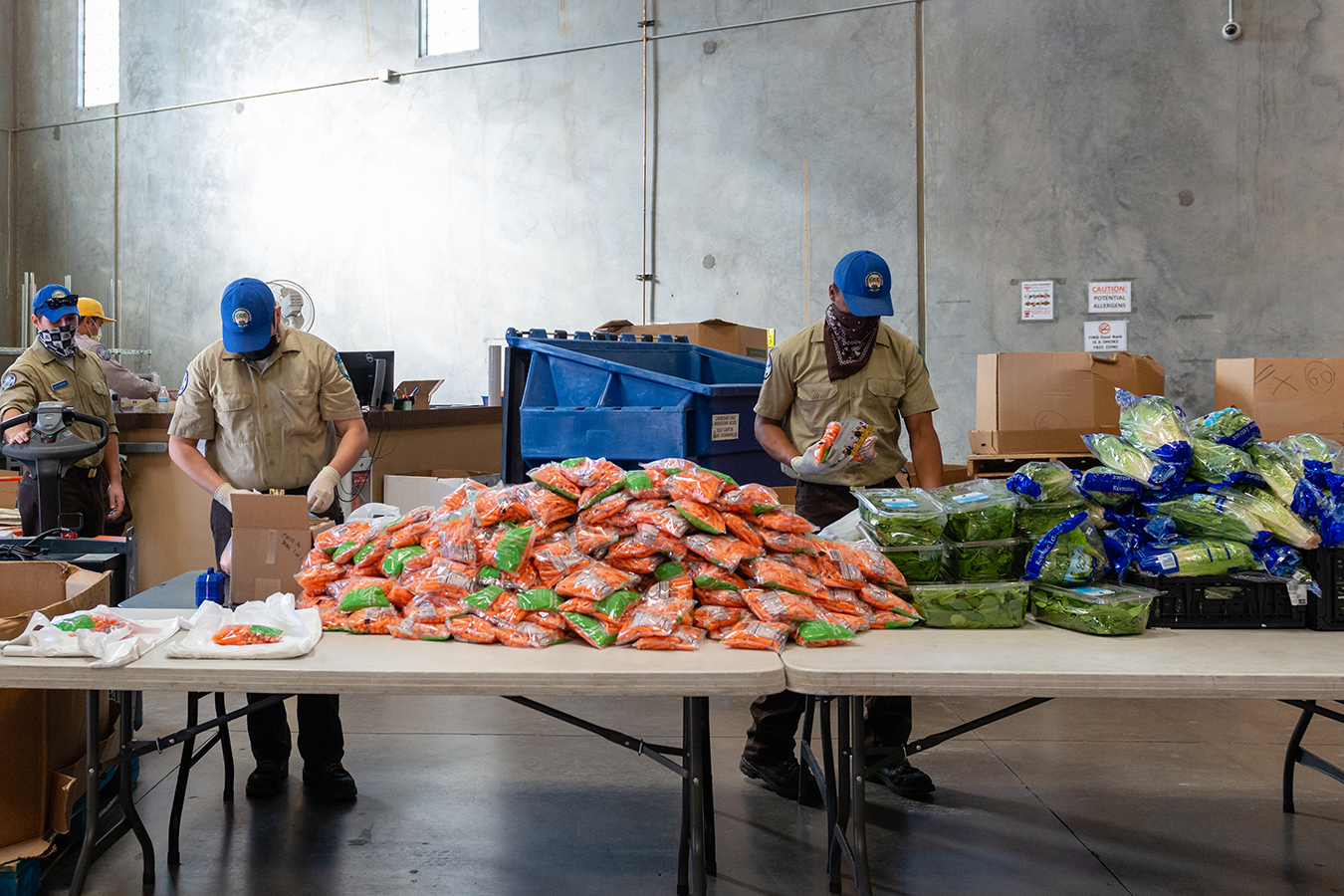 Corps members sort and package produce for delivery to homebound seniors, people with disabilities and a few COVID-19 patients. They pack about 2,500 bags daily.(Heidi de Marco/KHN) 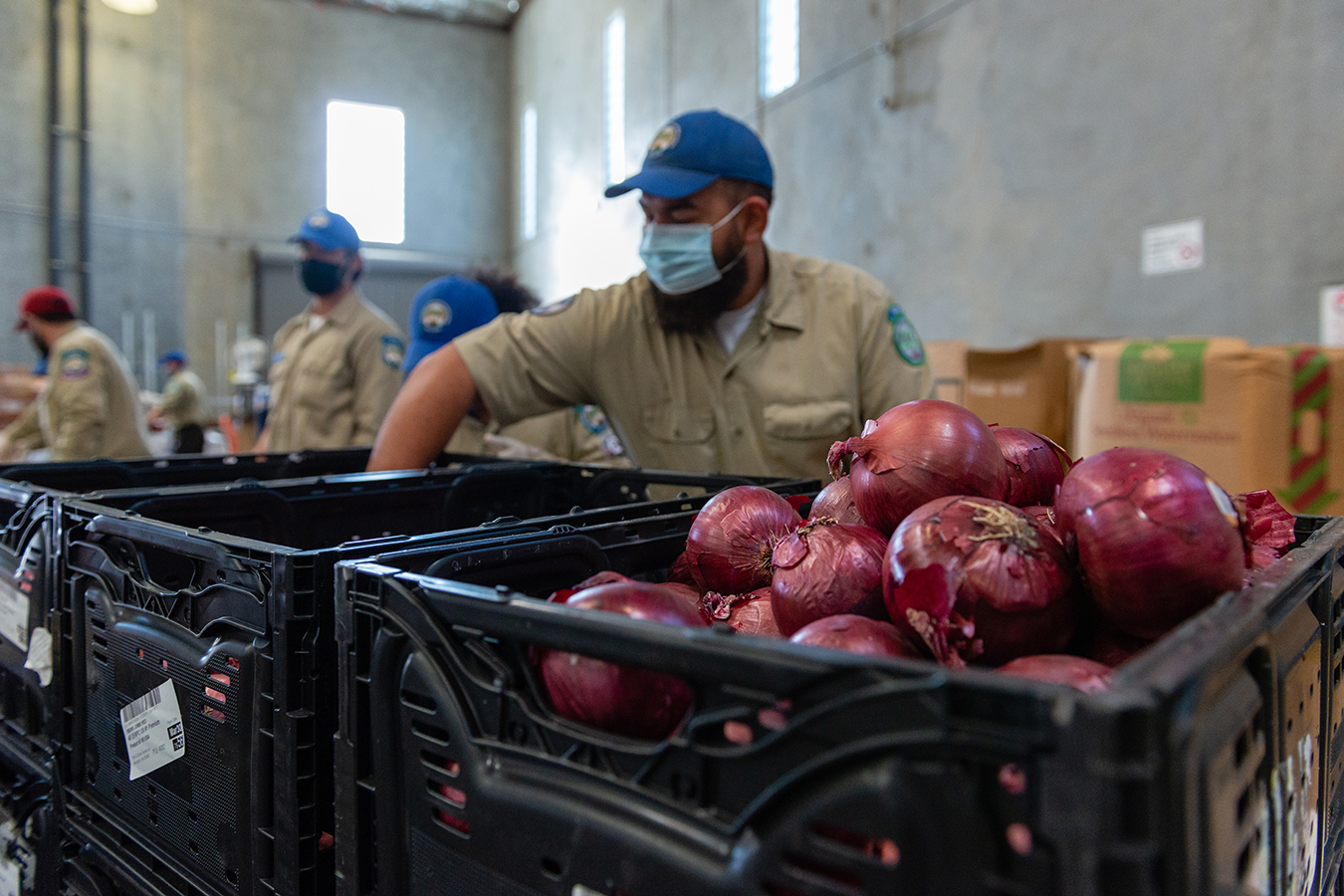 Recipients of the home deliveries receive one bag of fresh produce and one bag of dry goods, which Corps members assemble. “We really couldn’t do what we’re doing without their help,” Marroquin said.(Heidi de Marco/KHN) 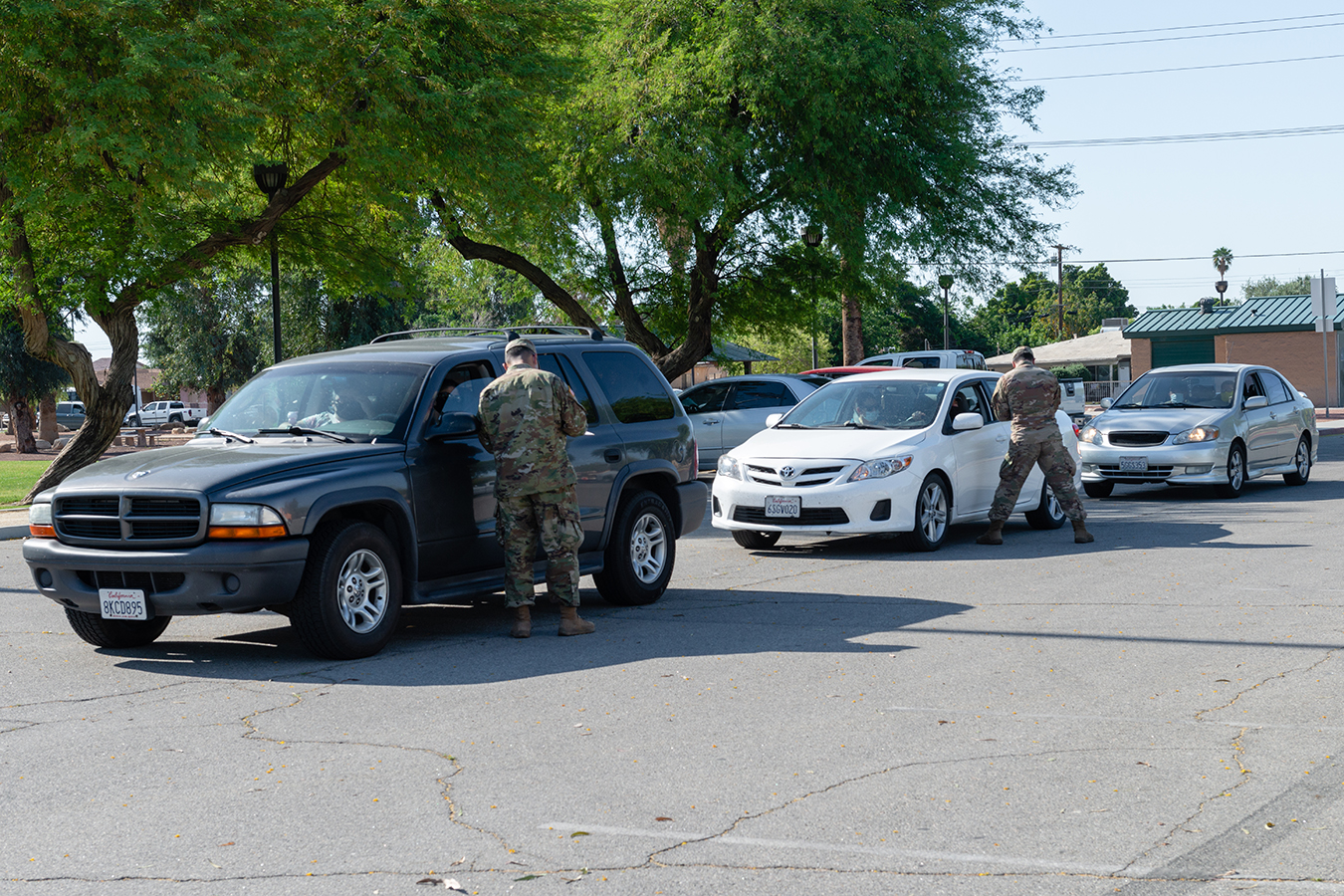 Members of the California National Guard welcome recipients who have registered for a drive-thru food line catering to older people.(Heidi de Marco/KHN) 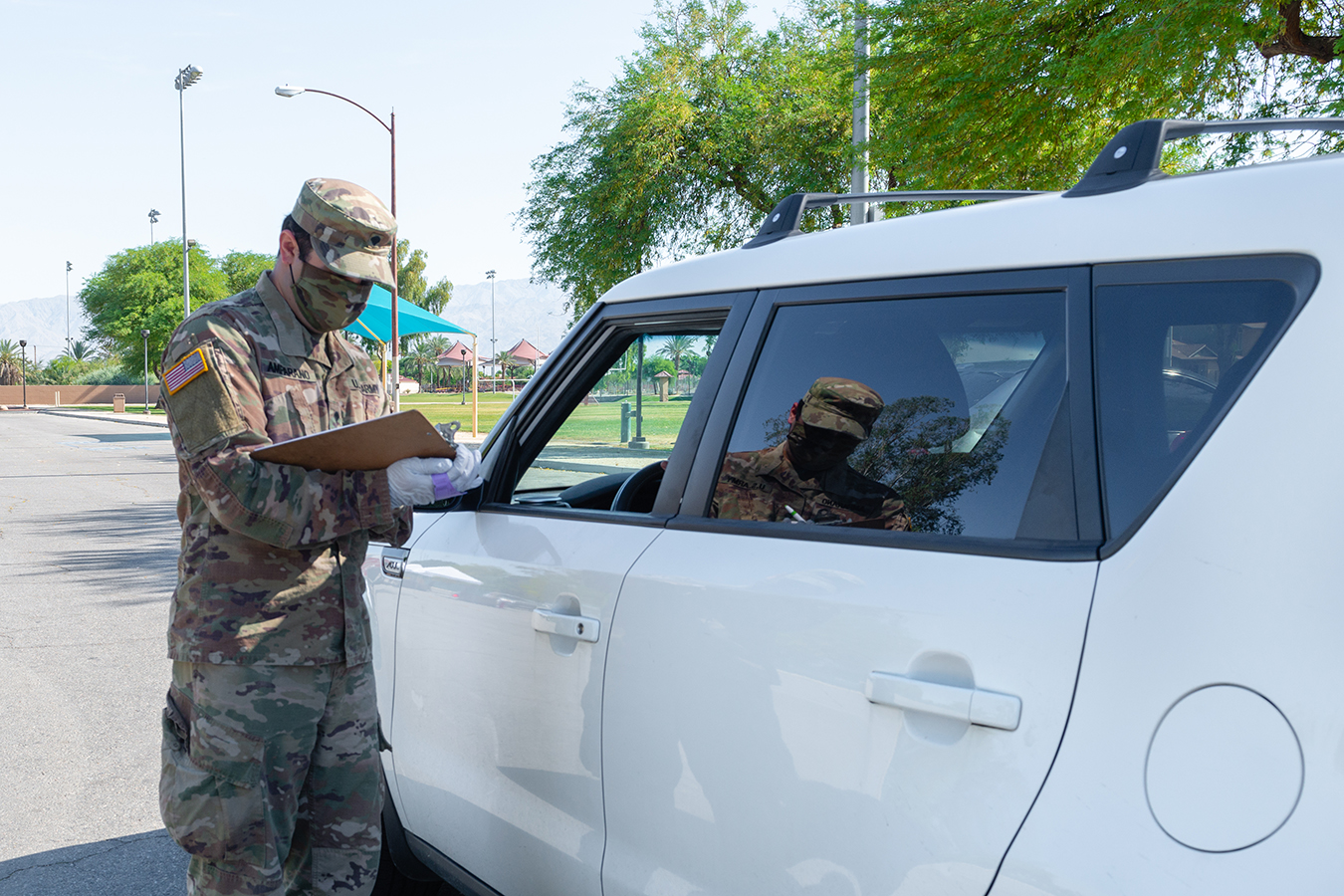 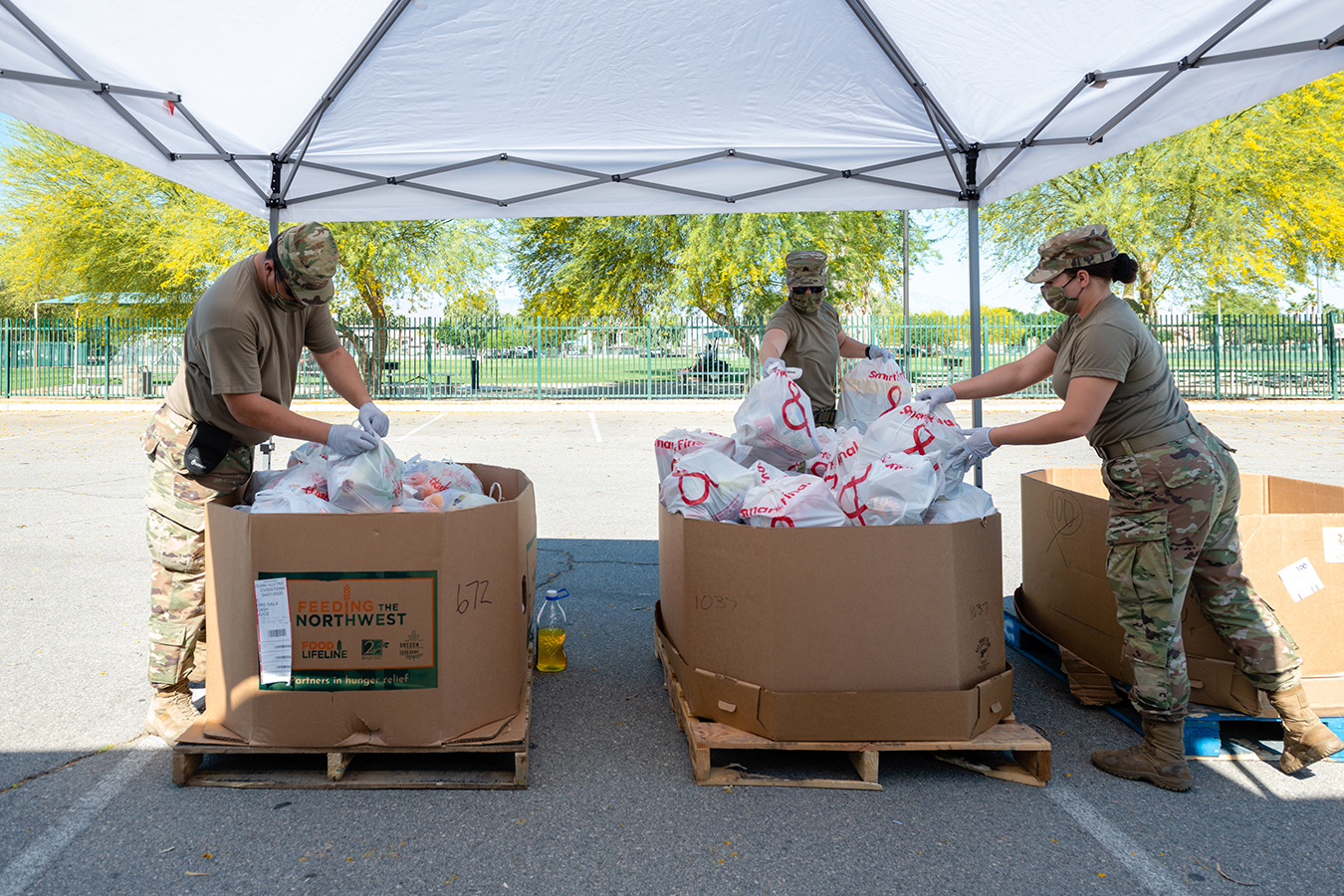 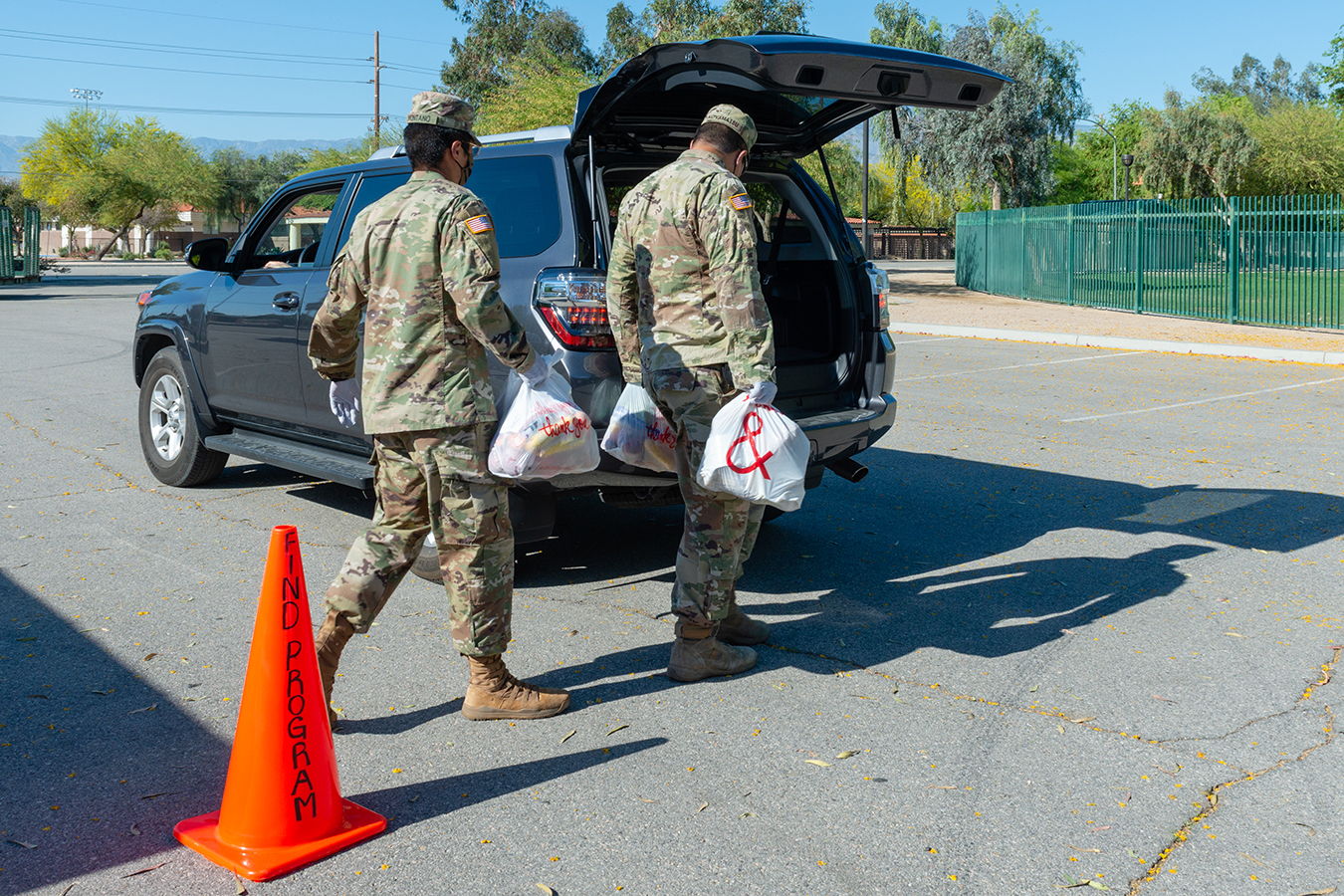 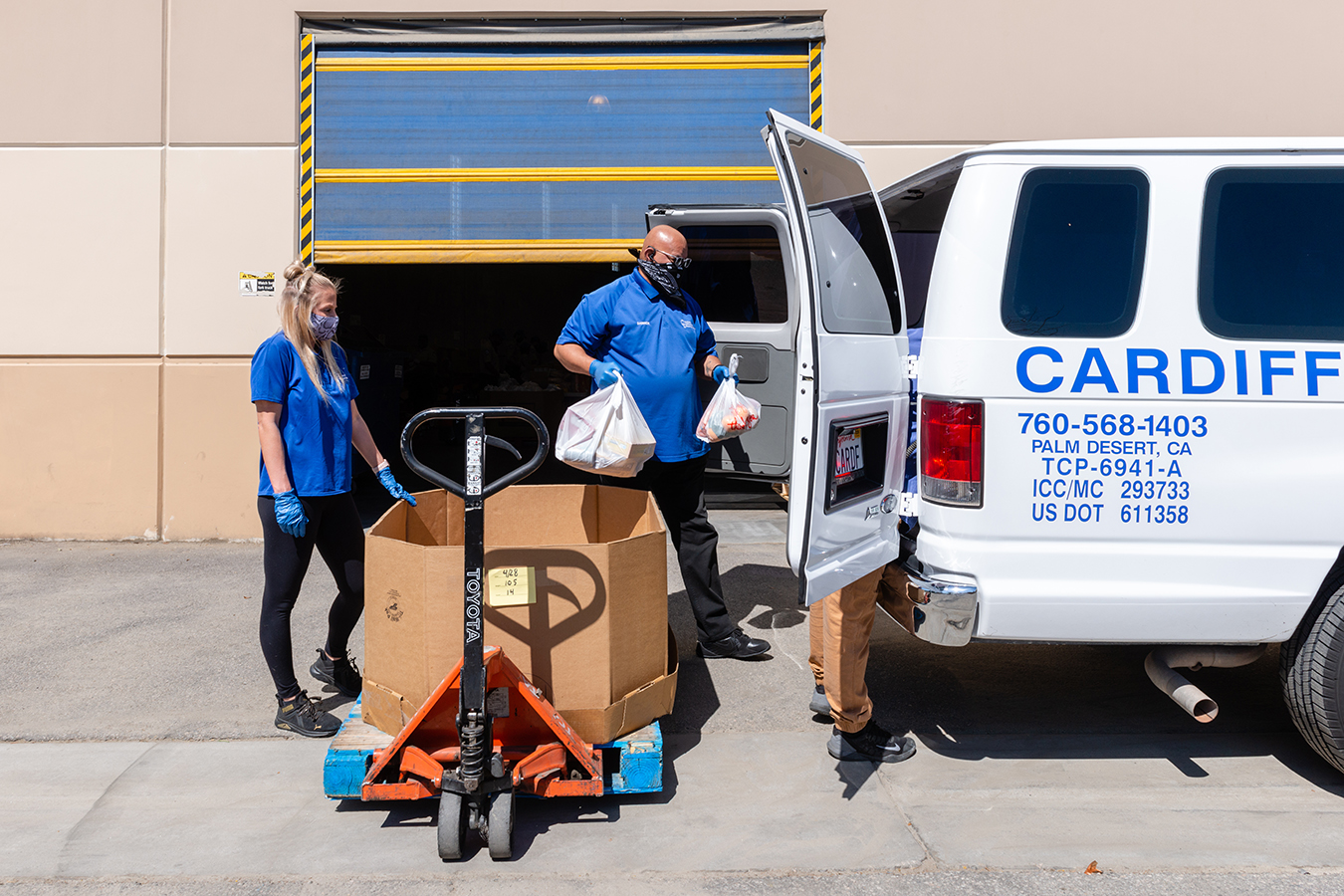 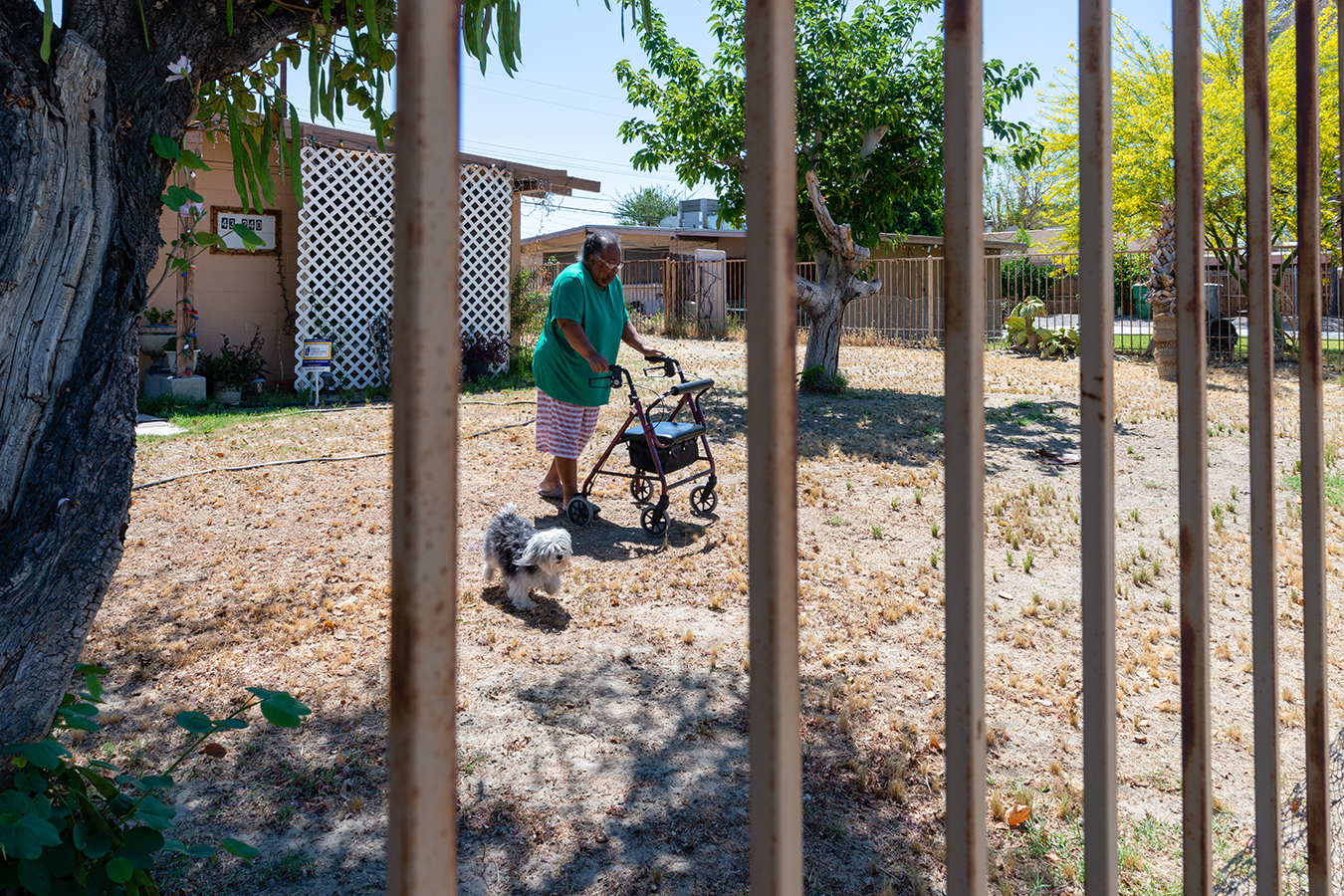 Johnnie Roberts relies on the weekly grocery deliveries from the food bank. The 80-year-old Indio resident says she has hardly left her house since the crisis began. “Sometimes my daughter gives me a ride to the store,” she says.(Heidi de Marco/KHN) 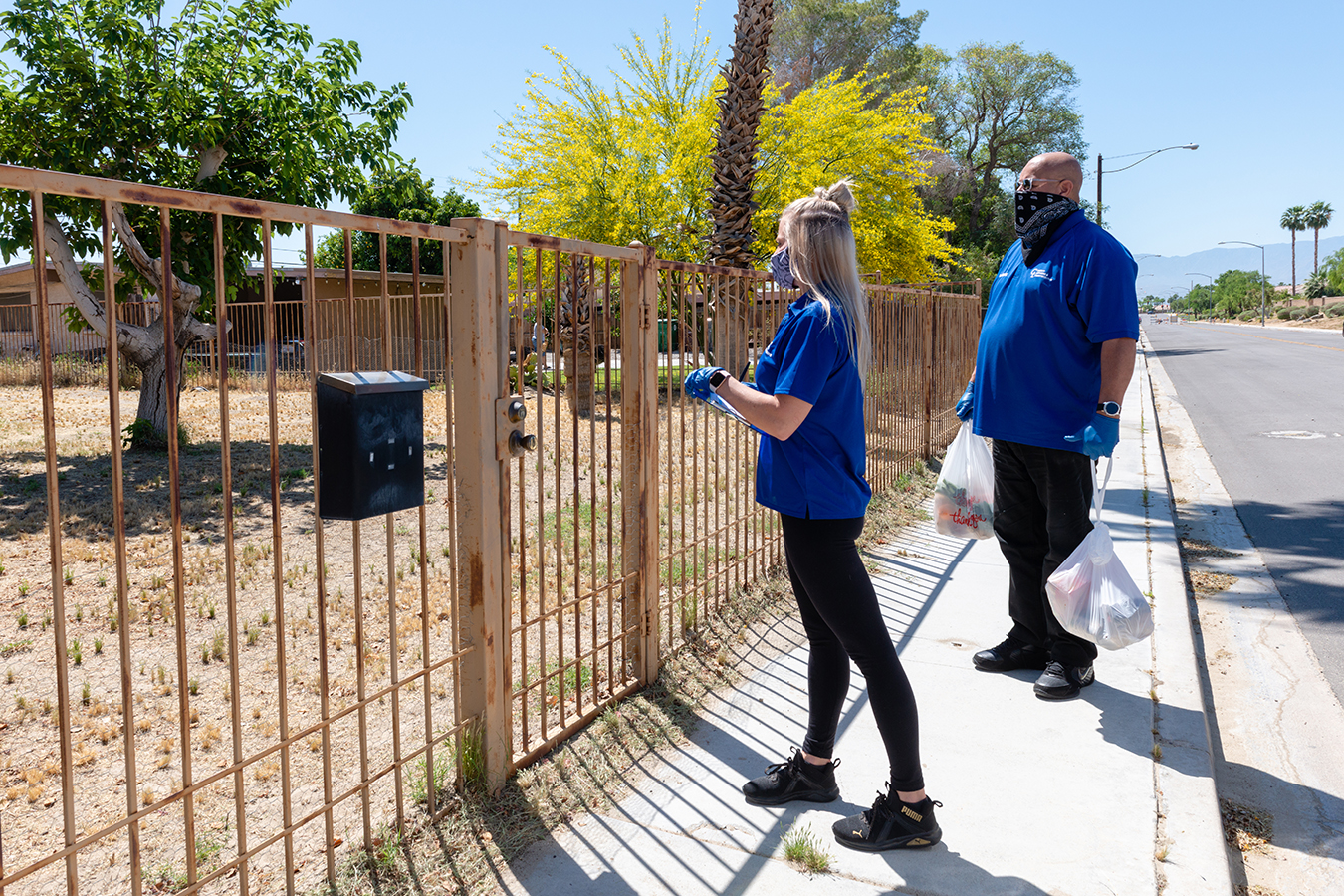 Lauren Cardiff and Darrick Hayes deliver food to Roberts and other homebound seniors twice a week. Cardiff and Hayes are employees of Cardiff Limousine & Transportation, a family-owned business in Palm Desert, California, that offers convention, tour and private transportation services. The company lost all of its business when COVID-19 hit, but realized it could still put its vehicles to good use. “Our industry was hit hard,” Cardiff says. “We decided to reach out to help.”(Heidi de Marco/KHN) 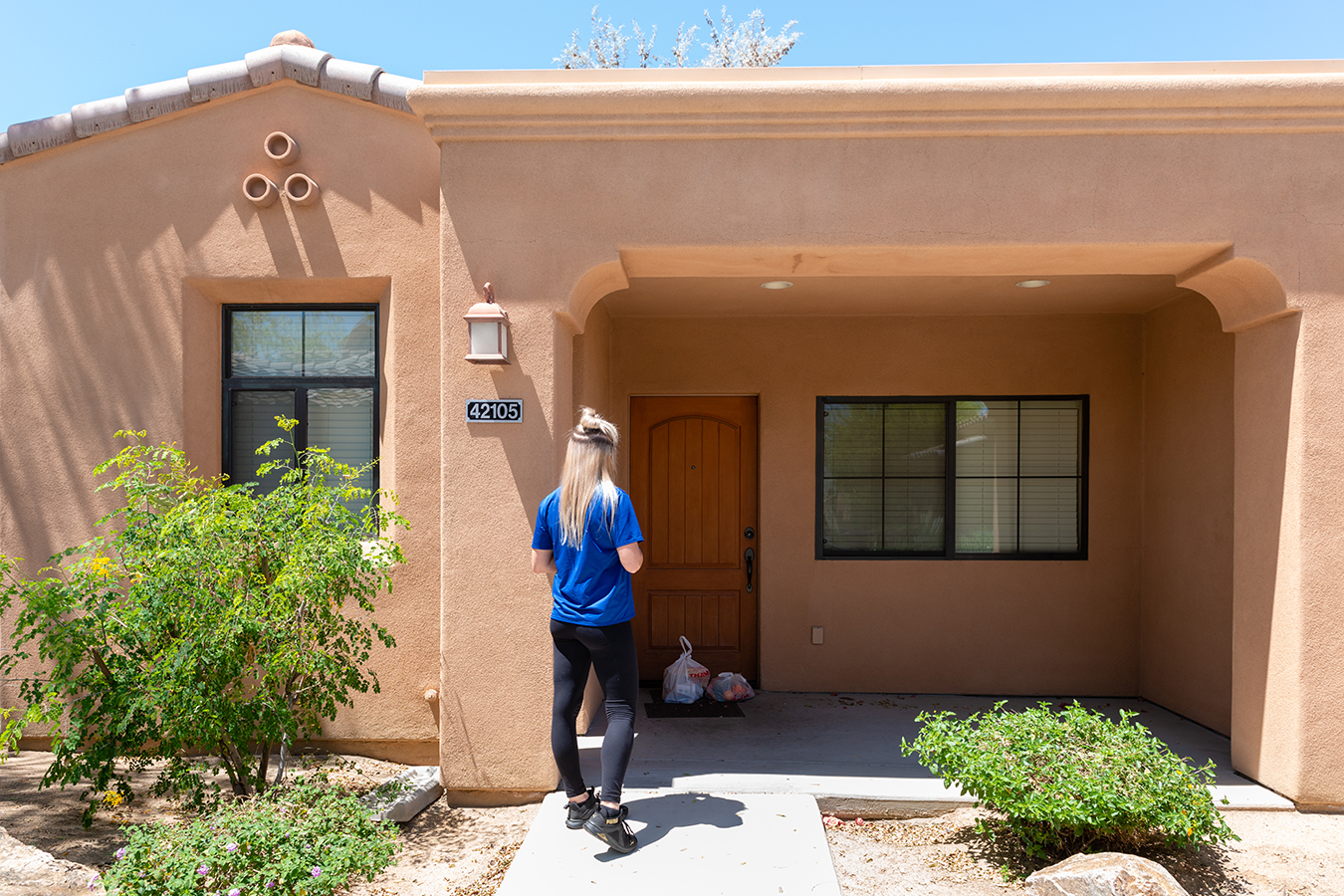 Cardiff and Hayes started distributing food in mid-March. “This wasn’t really about getting the drivers busy, but reaching out to see what we can do to help,” Cardiff says. The duo made 14 home deliveries on April 28.(Heidi de Marco/KHN) 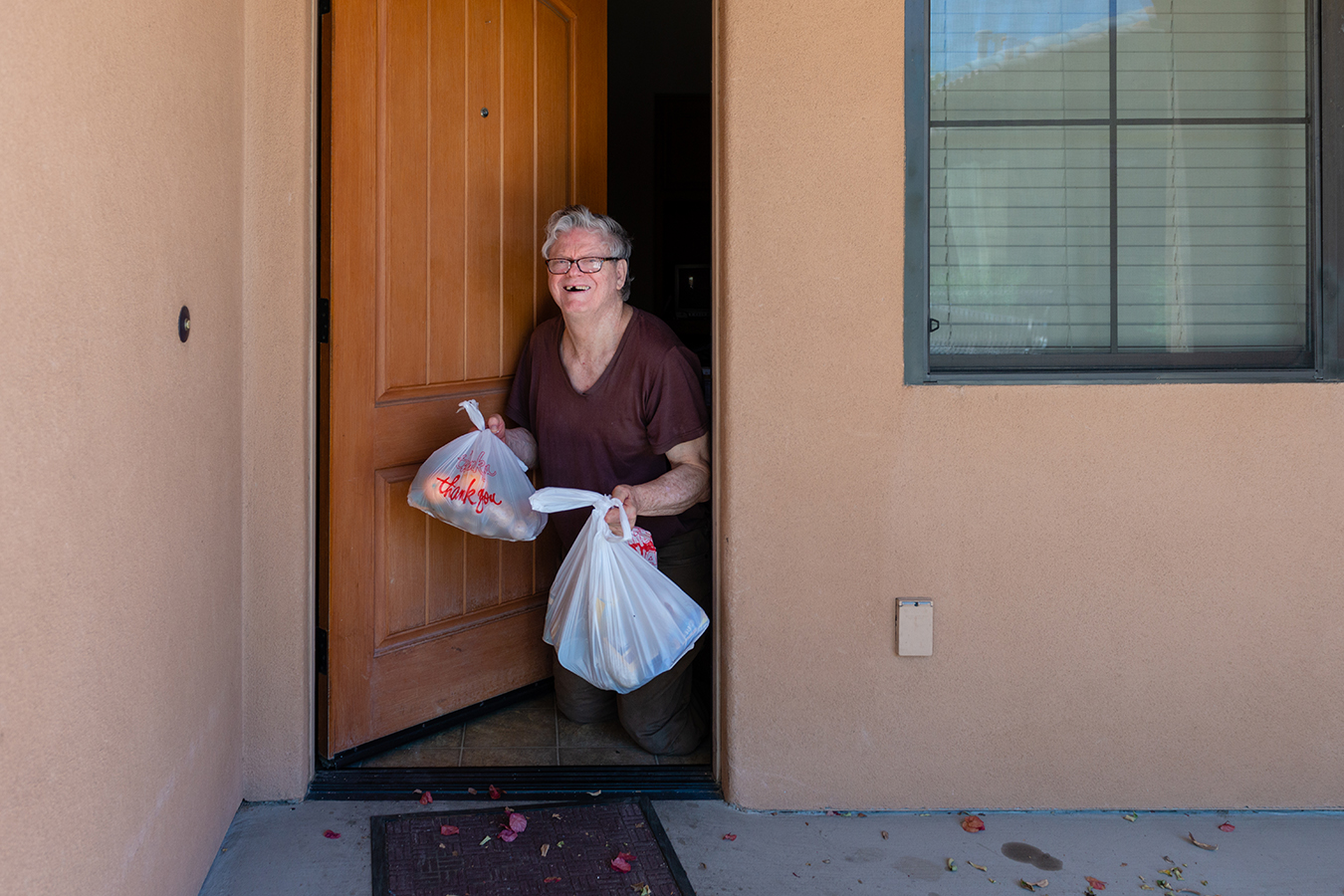 William Johnson lives with his wife in Palm Desert. Both of Johnson’s legs have been amputated from the knee down. “I think it’s great they’re doing this,” Johnson says of the food deliveries. “I take care of my wife and we can’t get around much.”(Heidi de Marco/KHN)